I love this print. I’m actually in love with Botticelli’s work, but I do feel it’s a bit naff to have a print of an original Botticelli hanging in your house. This is a detail from Andy Warhol’s version from the 80’s. Red is one of my favourite colours for decorating (one day I’ll tell you about my ill-fated red kitchen) and I love that it is a renaissance art work with a modern twist. It’s really big and I struggled to get a frame to fit it on a budget, so I ended up with this truly awful measly, stingy nasty little plastic thing with no presence whatsoever. And it’s stayed in that for a couple of years.

I have wanted to find a new frame for it for ages, but money was an issue, getting it professionally framed was totally out of the questions and I have been keeping an eye out for something old and ornate on eBay, but never really found the right thing for the right price (even if you could get something cheap the shipping was usually close to a squillion pounds).

It was only recently when Jamie was taking a pic of a bike (that’s kind of what he does, among other things) in front of the fireplace with the ‘Warhol/Venus’ in the pic that was then going to be posted publicly that I was like ‘NOOOOOOOOOOOOOOOO!!!!! ENOUGH IS ENOUGH!!!’ so I redoubled my efforts, scouring the shops and online. I realised (once again) that I was not easily going to find the right thing again, so I decided a DIY job was in order.

I’d already shied away from DIY-ing it having thought it through and deciding that making a frame with a recess to hold glass etc, was beyond my capabilities. Then I thought maybe I’ll just glue something over the existing frame to make it look chunkier, but it would basically have to be balsa wood for the crappy existing frame to support it, and that would look so wack, so I binned that idea pretty quickly.

Then I stumbled across this cheap and not-quite-so-nasty frame in The Range for £13.99 – and it was the right size! Hallelujah.

But is that good enough? NO. No it’s not. So, long story long, that’s how I got to the point of sexing up a crappy frame.

After I purchased the new frame, I moseyed over to B & Q and grabbed a few metres of decorative pine moulding / finishing trim. I then tried not to take out any little kids with several metres of it sticking out of my trolley and managed to get it into my car (only just taking up the entire length of the car diagonally from boot to foot well).

Now it was time to measure up, mitre those corners and get gluing. 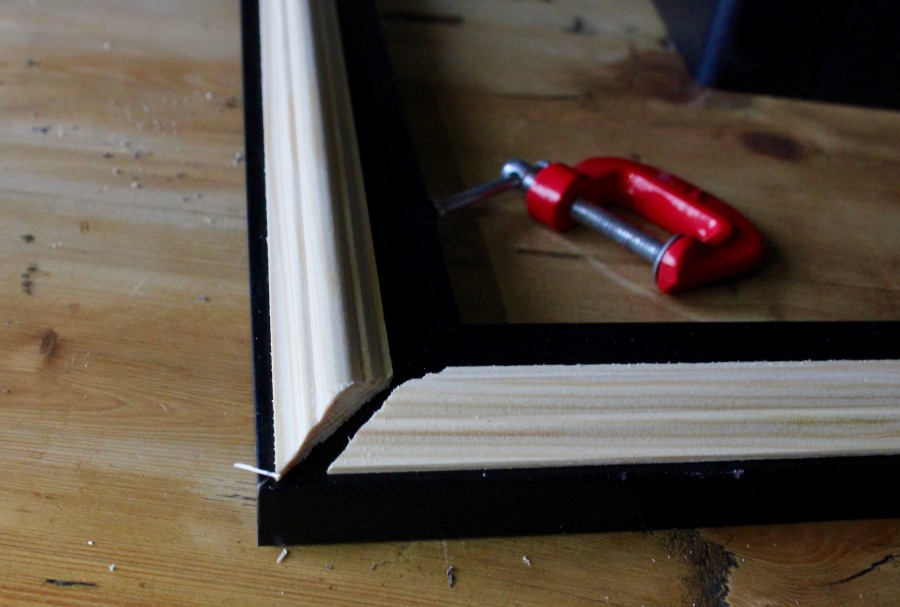 Once I had all of the strips in place and glued, I filled my slightly dodgy corners with some wood filler, using a cotton bud to smooth it over the ridges of the moulding: 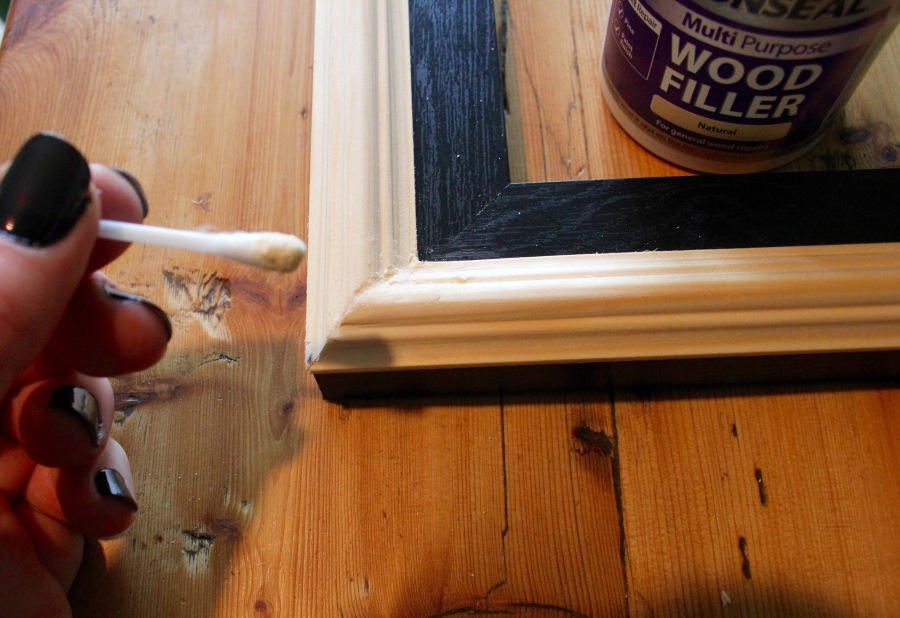 Next it was spraypainting out in the garage. While I had the paint set up I decided to give this other frame a quick going over – it was a kinda grim plasticky wood-look.

Ok, so I did a couple of coats of spraypaint (over a couple of days because it’s about -50 degrees in our garage right now.

The day came. The paint was dry. I was getting excited about re-framing my print.

I picked the frame up. And the moulding started to come away from the frame. The glue had not done the trick and I think the combo of the cold, the spraypaint, and probably the fact that I didn’t sand down the frame to create a slightly rough surface that things would better adhere to. Lazy! Cutting corners does not pay, kids.

So out came the hammer and tacks. This was an arduous task. For some reason, whatever unholy material the frame was made out of made hammering in a tack a major event. It was like hammering a piece of straw into concrete. (No pics of this process – I was kind of grumpy about the straw / concrete situation and just wanted to get it done so I forgot the camera until after). After what felt like 7 hours of hammering, the moulding was once again attached to the new frame. I slapped a little filler over the tacks, waited for them to dry, and sanded the excess filler smooth. 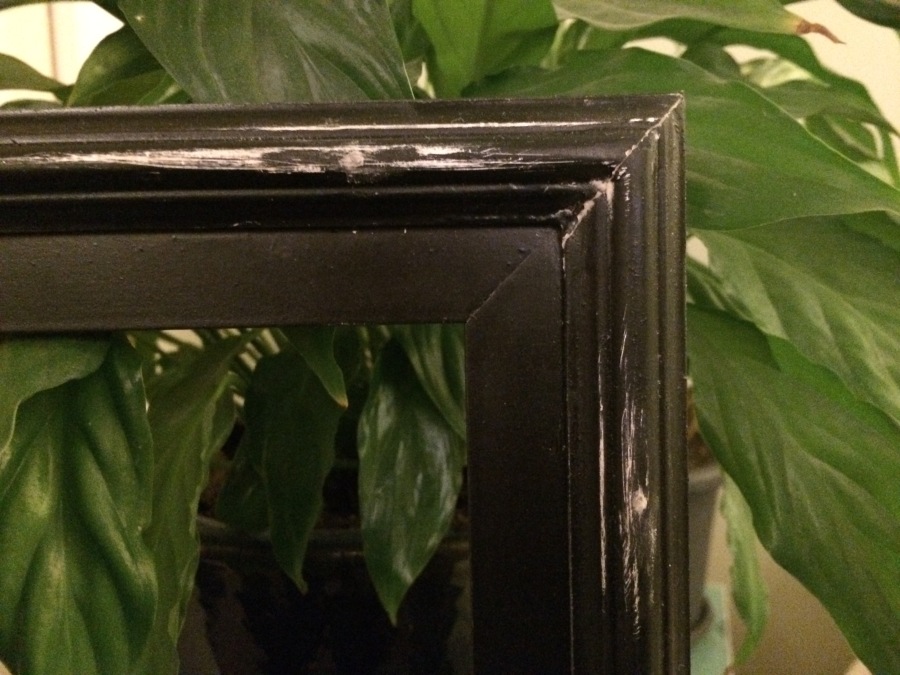 Then it was time to repaint, so back into the freezing garage.

Couple coats later and I was ready to put the frame back together. The print had too large a white area around it so I gave it a trim.

Once that was done, I put the frame back together and up she went on the chimney breast.

Here it is again, before: 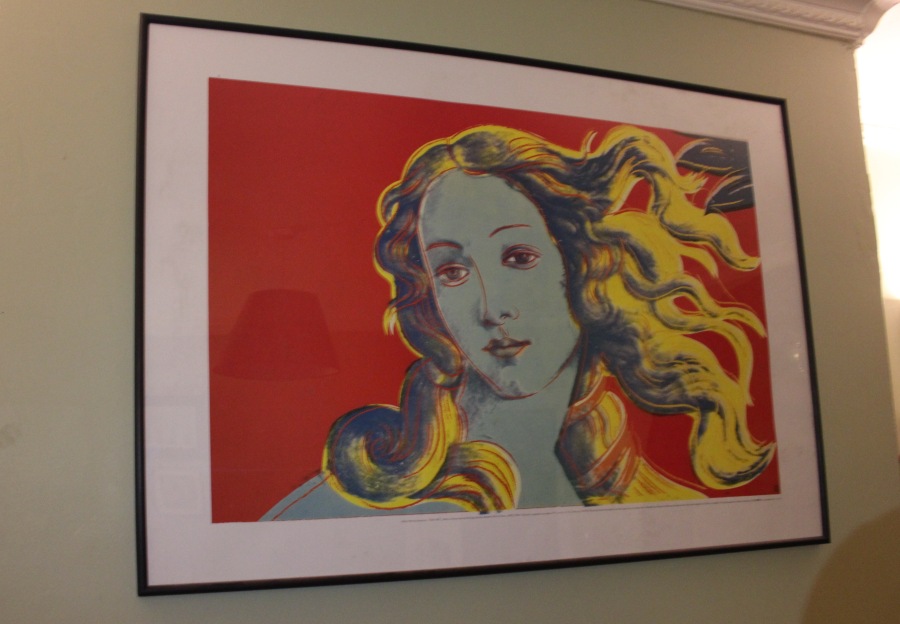 And here we are after: 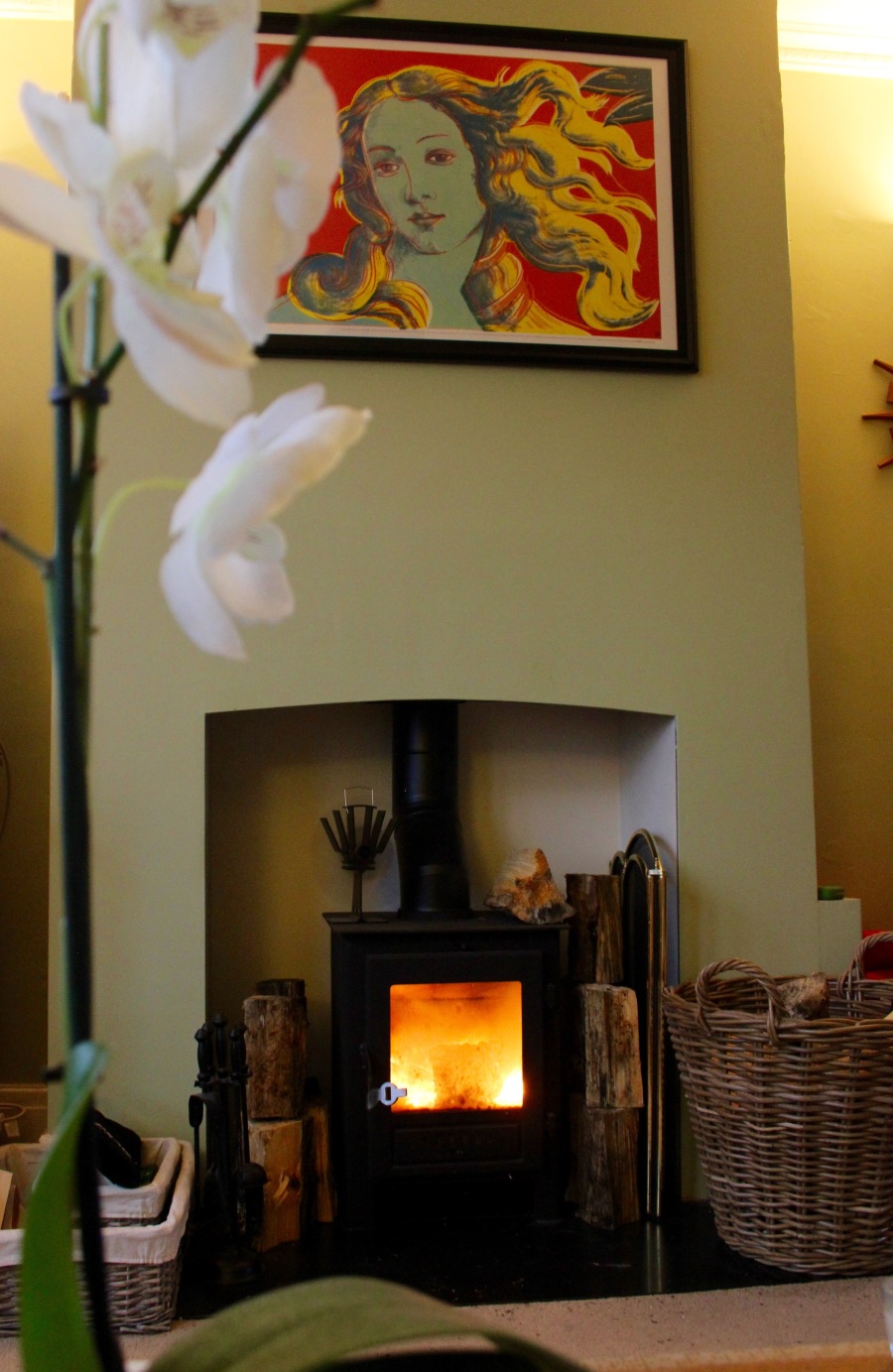 Much chunkier and a better balanced ratio of frame to white area around the print.

I’m chuffed with this – some would say it’s a small detail, but for me it’s a massive difference, and helps to not make my eye twitch everytime I look at our lovely print.

Oh and here is the other frame I painted. The artwork is a print by Martyna Zoltaszek called Panic in the City. I bought it for Jamie a few Christmasses ago. Much more striking in black I think. One day I might be able to afford to take it to a proper framers!

So that’s my little frame hack. It was supposed to be a few hours each day over a weekend. In the end it took the best part of the week doing a bit after work each day. The whole glue setback that added and extra couple sessions. No More Nails my arse.

One thought on “Frame Hack”