One of the major things we knew we wanted to get done to the house after we moved in was to get a wood burning stove (or log burner as we call them in NZ) installed in our front room. We actually had a mate who had DIY’d one in his home, and we had a chat about it with him, but pretty soon decided that roof clambering and building a lintel to stop the chimney collapsing was not even close to the realm of our abilities. So glad we got the pro’s in.

Our living area consists of what used to be two separate rooms, front and back, but has been knocked through and a fetching brick arch installed (not the first time we’ve lived in a house with this feature – must have been quite the trend around these parts a few decades ago)… I mean what do you do with a 70s brick arch as your main feature between your two main rooms?! But that’s for another post. If I ever figure out what to do with it.

So from what I have pieced together, the history of this house’s heating is something along the lines of this: originally there would have been an open fire in both the front room and the back room downstairs. I assume that when the rooms were knocked through the fireplace and chimney breast in the back room (our dining room) were removed to make the room more spacious and because there was no need to have 2 open fires in the same space. This is the same chimney breast I refer to here which is inside the epic mirrordrobe in our bedroom – of course they removed it from downstairs and not upstairs – no problem – ‘I’ll just leave tonnes of brick suspended upstairs and the take away the brick it was sitting on’ WTF. This was actually flagged up in the survey we had done on the house before purchasing, but I’ve since read this is a quite common (if dodgy AF) practice. I’m hoping/guessing/blindly assuming they added the extra supports required to do this kind of job. It seems to have held so far… *shrugs*

At some point the open fire in the front room was replaced with a gas fire (see pic) – I guess when the central heating was installed – and a Victorian fire surround was either added or kept. You can see this in the pic from before the house was sold to the people we bought it from:

Then, at some point in the 4 years that the previous owners had it, they for some reason removed the gas fire and replaced it with… nothing. No wait, they replaced it with a bit of cardboard to ‘“stop spiders coming down the chimney” (actual words told to us by the estate agent, no shit). At this point I have to pause and apologise for the state of most of the photos on this post – many were take a long time ago on my phone and may not have specifically been photos of the actual thing I’m referring to here, so I’ve zoomed in and cropped in and now they look even worse.

Why they removed the gas fire to replace it with nothing I have no idea, but due to the fact that this house seemed to take a sharp decline in condition the 4 years leading up to us buying it means that this doesn’t surprise me somehow.

So, we were left with a very pretty fire surround, surrounding some lovely black granite and a very un-pretty piece of cardboard (which I painted black immediately so it would blend in at least. And it’s not like I was going to remove it until we had a solution for this area. I mean c’mon – spiders.

When we decided to get the stove installed we FULLY intended to keep the wooden surround. It’s so pretty and useful for holding bit and bobs, birthday cards etc.

However. As soon as we found our stove installer and he came over to get a quote it became obvious that keeping the wooden surround was going to be a problem. It did not meet regulations for how far away you need to keep wooden features from a stove, so we would have had to get a metal plate installed lining the wooden surround and shielding it from the fire, and this would have had to have an air-gap so as it didn’t heat up and set fire to the wood. We were fully up for getting this done and I agonised over it for so long, making the poor installer give quote after quote for changing a little thing here or there, the whole time he was gunning for us to get rid of it. In the end it was going to cost at least an extra £500 or more to keep it so we decided to proceed with getting the surround removed. As wasn’t an original feature I felt a little better about it, but it was something that attracted us to the house in the first place so I was pretty gutted.

Right, so on with the work. The stove we chose was an Esse 1. A small, well reviewed stove. I liked the simple, modern look of it and it wasn’t going to break the bank.  We were also lucky enough to get to use our installer’s account discount at the stove shop, so we got 25% off which was awesome. We ordered it a couple of months before installation as it had to be ordered in.

Then we had to get a gas plumber to come as the old gas pipe from when there was a gas fire there before had just been capped off in the fireplace, so for safety obviously that had to be capped off way further back under the floorboards. Here are some pics from that scary process (scary because of floorboards being pulled up).

Once pipe work was sorted the installation could proceed. The fireplace opening was enlarged (we got the granite surround removed and cut into shape to form the new floor and hearth of the fireplace – reuse, bitches!).

After that a new lintel was installed, fireproof boards added to line the inside of the fireplace, the chimney relined and a new chimney pot added on the roof.

Then the stove was installed and the chimney breast was plastered to cover where the granite and wooden surround had been. The whole thing took just 2 days. (not including the gas plumber work).

After it was installed I painted the fireproof boards white-ish (can’t remember what paint I used) and then  just had to wait for the plaster to dry before I could re-paint the chimney breast. By the way, the colour in this room is Dulux Crushed Aloe. I’m such a green fiend so I knew before we moved in that I wanted green walls in here. 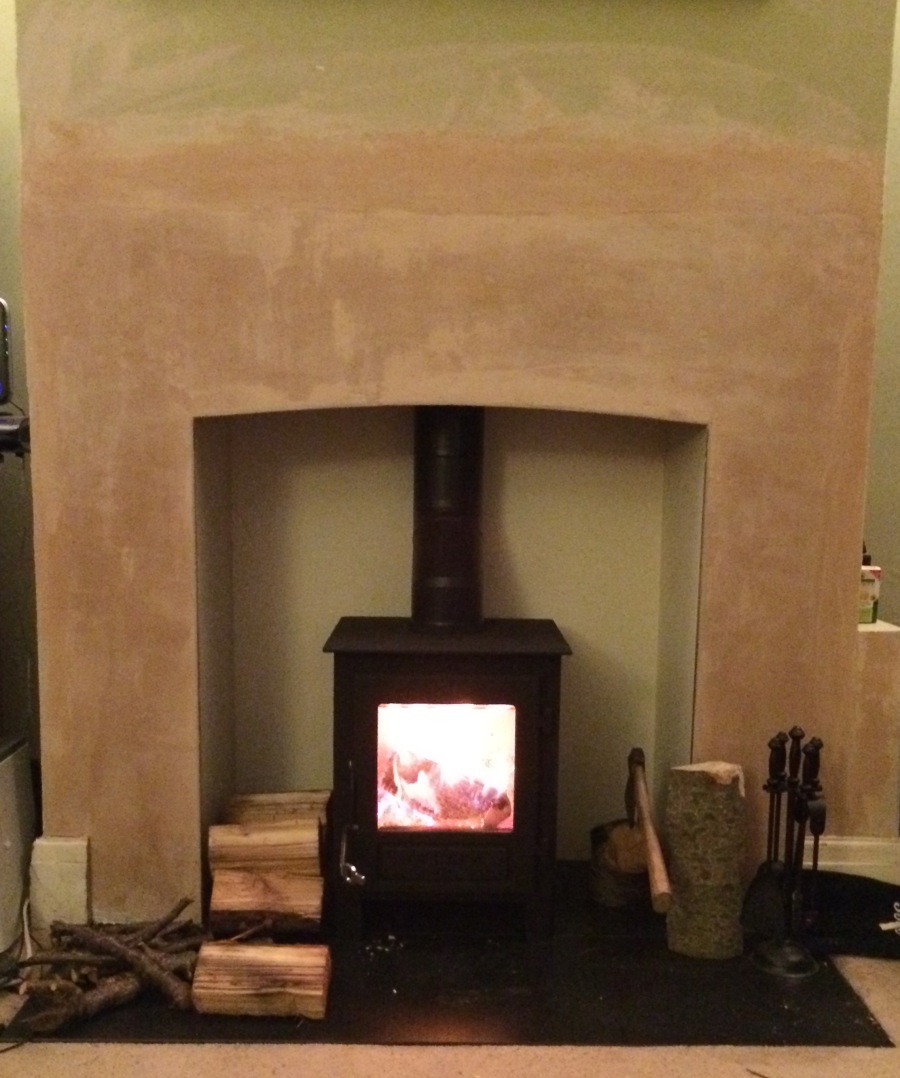 And here we have it! I can honestly say I don’t miss the wooden surround, it’s actually really clean and smart looking without it, and it was a total receptacle for whatever junk found its way on there. It has found a good home at the sinlaws’ beautiful old stone coach house in north Wales.

We absolutely love having the stove in. Our gas bill absolutely plummeted last winter – we ended up with a £500 credit in our energy account by the summer (by paying the same amount by direct debit each month while barely using the central heating).

Firewood isn’t cheap round these parts unfortunately, but we buy 2 builders dumpy bags-full at a time and that lasts us a couple of months.

Oh and last winter the sinlaws gave us this little fan (something along the lines of this) because they bought it for themselves but it turned out not to be the right thing for their Rayburn – it sits on the top of the stove and is powered by the heat coming up through the stove. It helps to push the heat out of the fireplace and into the room. 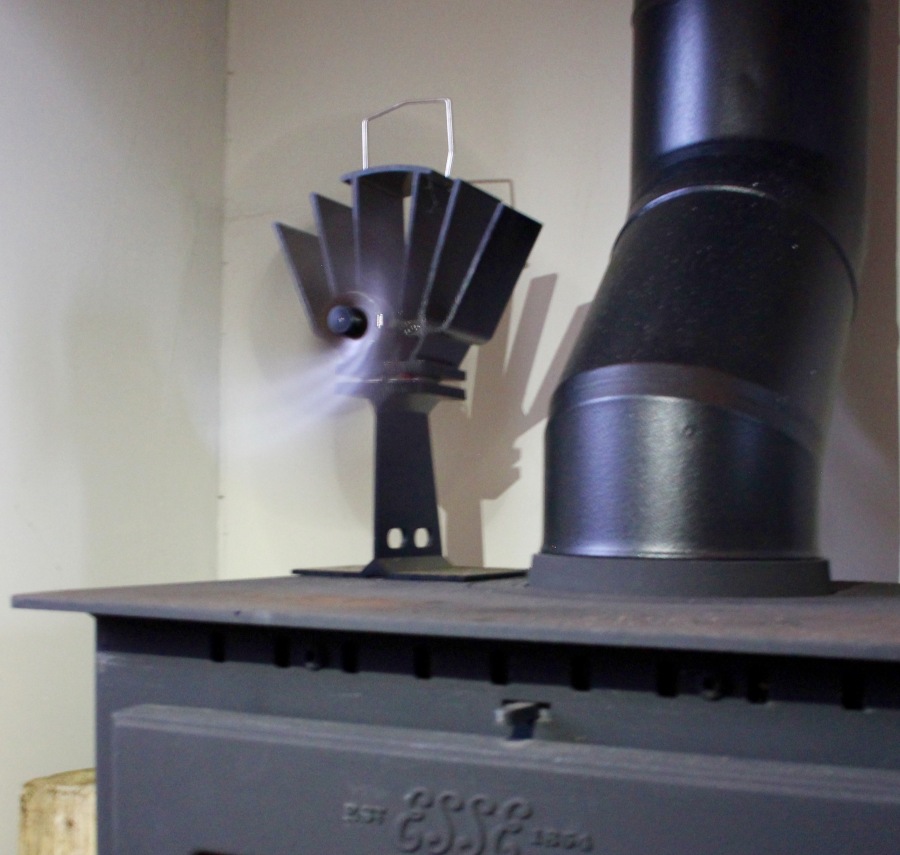 So yeah, it wouldn’t be overstating it to say that the stove has transformed our lives. It was an expensive project, but so worth it. I’m a total summer person but I was actually excited for the winter this year! Bring on cosy Christmas. Hell yeah!!

2 thoughts on “Getting the Wood Burning Stove Installed”