I purchased our coffee table second hand, mostly because it has storage inside, and a shelf. More places for more crap amirite? When I got it, it looked like this – kinda meh…boring, ugly dark stain. It was chipped and the hardware was broken. With the bleugh brown colour it felt like it was sucking the light out of the room.

I wanted to lighten this up and make it look prettier. It’s not solid wood. It’s mdf or some such, covered in an oak veneer.

I had a hell of a time getting the stain off. I tried all the different methods. It kind of tested my resourcefulness. I started out trying to sand it, but it was pathetic how slow this process was. And I was feeling impatient. 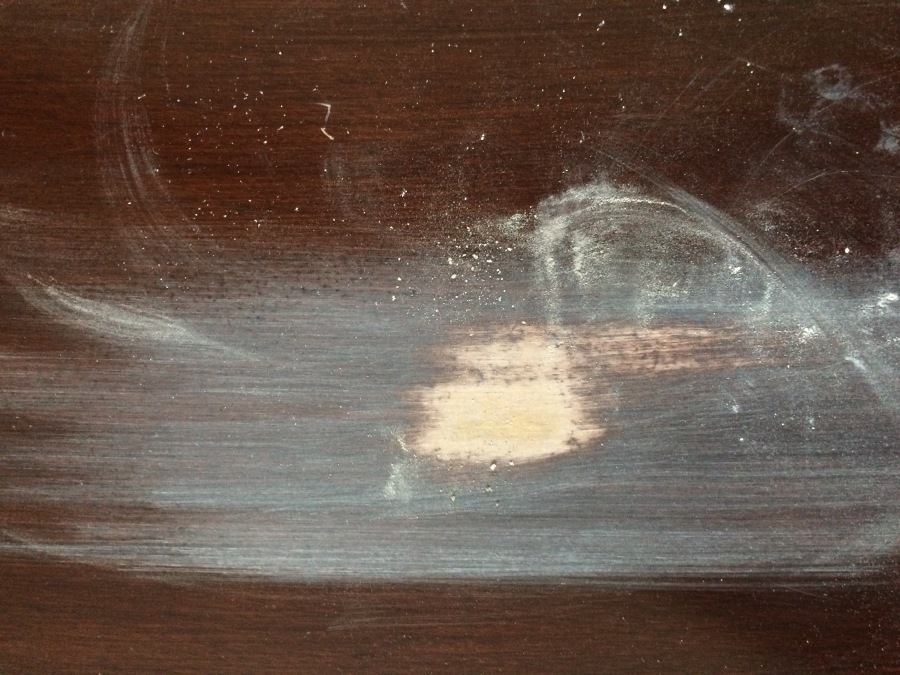 So I switched to the heat gun. That worked ok for the most part but some bits wouldn’t budge for some reason. I always find a heat gun easier on thick paint. One a thin layer it’s tricky because you have to be so careful not to scorch the thing you’re working on.

So then I moved on to various paint strippers. I hate using these. They make a mess and they’re generally really toxic. I used one I had read about online (when I finally face my demons enough to write about my stair / bannister project I’ll give a detailed rundown on the many and varied products I’ve used) called Peelaway. Unfortunately, I managed to leave it on too long, and while it worked like a dream for the most part, it actually ate through the veneer down to the horrible fibre-y mdf in a couple of places agggggghhhhhh!! Total. Mess.

At this point I was about to throw the table out into the street but I decided to try once more to salvage it. Also, I set out intending to strip the stain off the entire thing, but quickly realised that would be a foolish endeavour and that I would be content with just stripping the top surface.

So I painted the rest of it with satin ivory paint and cleaned the gunk off and gave it a sand down to smooth everything out and asses the damage. Unfortunately, the edges where I’d left the stripper on too long we totally effed.

How the hell was I going to salvage this mess?

OK, so after sanding and smoothing out the top and wiping down to remove dust, I went on a washi tape buying frenzy. Washi tape is an extremely adorable sort of papery type of decorative adhesive tape invented in Japan. If you search Pinterest for ‘washi tape furniture’ or ‘washi tape craft’ you will see a gazillion ideas for it’s use. I wouldn’t actually use it to hold anything together, it’s very much just decorative (which is handy because you can stick it on walls and it shouldn’t damage paintwork). You can get it in every imaginable colour and pattern and it costs next to nothing.

If you’re a person like me who gets a bit of a thrill from buying stuff, like any stuff, this is a fairly harmless / cheap way to indulge that bad habit.

In the end I decided to go with this cute gold geometric one. I stuck the washi tape around the edges of the table and voila! – no more raggedy edges.

I then varnished over it all with a couple of coats of clear satin varnish.

It’s a nice solid table and a good size for the front room but I will say we hardly ever use the storage because that would involve lifting the lid, which involves clearing the stuff off the top, so to be honest stuff that goes in there very rarely comes out again. (It’s where we keep stuff like the weird novelty musical instruments that we are obsessed with for a week before they become super annoying). The drawers are decorative, which is annoying *eye roll*. They would be very useful for actually making more regular use of the storage inside.

I also switched the old metal hardware (one of which was broken) for some little wooden knobs which give it a bit of a cosy farm-house-y feel.

The shelf underneath is useful but had a tendency to get really messy so I bought a couple of orange baskets from Homesense for a couple of quid which I use to store more miscellaneous things out of the way. One contains a lot of my makeup and stuff like nail varnish, as I tend to get ready for work downstairs in the morning. The other one holds various cables, chargers and other stuff we use frequently down here.

So as you can see, I have some issues with this project. It was definitely more work than was probably worth it for the final product, which is not a table that I am totally in love with. I always have my eye out for my perfect coffee table. What that is exactly I’m not sure. The gorgeous, elegant ones don’t usually have storage, and the practical storage-y ones aren’t usually particularly glamorous. HALP.

This one does the trick for now – it’s very functional, solid and kind of pretty in it’s own way… and it certainly taught me some lessons about upcycling that I won’t be repeating. Don’t bother stripping veneer!!